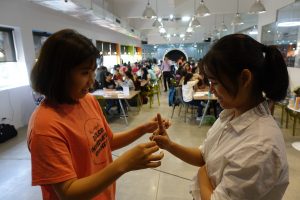 Rubbish Science in collaboration with CollaboratEd won a contract with the British Council and the British Embassy.

The aim of this was to increase the participation of girls/women in STEM. These are the impressions gained from six days in Vietnam talking to many stakeholders.  To try and determine the barriers and a way forward to increase the number of women taking up STEM careers. Rubbish Science Activities were used throughout with the longer term aim of embedding them into Vietnam.

We had a three day Boot Camp to create STEM Ambassadors. We wanted to develop good role models, who understood gender issues and were capable of leading sessions with younger students. Many girls don’t even consider STEM careers as they feel it is ‘not for people like me’ Having girls and women in front of them delivering science activities is one way to combat this way of thinking.

We had meetings with stakeholders some of whom felt that the current Vietnamese science curriculum in state schools was rigid and possibly didn’t inspire. The textbook being used nationally is currently being rewritten partly to address this. STEM activities seemed to be mostly happening in the private school sector and were at best a bolt-on to the school curriculum as opposed to being embedded within it. There seemed little opportunity to explore and develop scientific ideas in mainstream classrooms. Evidence suggests that girls are more likely to be engaged in STEM if they can see the relevance of it to their lives. If STEM subjects appear to be mainly about abstract concepts then although they perform well at exams, girls often lose interest in pursuing these subjects further  According to some Vietnamese women in very high managerial positions we spoke to the career path of women in STEM is beset with a bias against females due to stereotyping. This leads to the Catch 22 situation where a lack of female leaders in STEM may reduce the number of women applying to be leaders. Research suggests that men generally feel they can apply for a job if they feel they can fulfil at least 60% of the job description. For women, the figure is usually nearer 100%. So increasing the confidence level in women may be helpful.

My colleague Alessio Bernadelli (@asober) and I had around 130 female university STEM students as well as some teachers and lecturers, a few of them male, for three days to create STEM Ambassadors.

I started by asking for a volunteer to come up on stage. The only person to put their hand up was a man!  The first learning point; In mixed school groups asking for volunteers will often lead to domination by the boys. Responding to questions, almost all of the delegates felt they were perfectionists and also sadly most seemed to have the high achieving female trait of never feeling that they were good enough. Most said they were afraid of failure. Well over half said they related to the image below of  stereotypical Asian parental expectation

We did some quick co-ordination exercises that people would fail. We talked about how failure shows us where our limits are and how we can learn from it. That growth happens when we step out of our comfort zone. Boys tend to be brought up to be brave and take risks, girls to be good and perfect. Taking risks might challenge that sense of perfection and may be the reason many girls duck out of challenges. Volunteers started to come on stage and we applauded their public failures. By the end of the course, most had been on stage often failing, taking themselves out of their comfort zone, but being applauded for being there and taking the risk.

The Vietnamese Government has been active in promoting women rights and even equity above equality, but cultural norms are hard to shift. Unconscious bias cannot be shifted by regulations or policy. People need to be made aware of their biases, particularly if they lead to prejudices.

Most delegates had heard the old saying

‘A boy is everything, ten girls are nothing’

All three Vietnamese films on the plane I watched had some reference to the greater importance of boys. The consensus of the group was that although there was a positive shift in attitudes that Vietnamese women were deemed to be the carers and homemakers and Vietnamese men the providers. Some had a genuine fear that the cost of an impressive career might be the loss of a husband and family. With over 400,000 qualified professionals working overseas no one knew of a woman who had got a job and her husband had followed her abroad.

A meeting with schoolchildren also echoed these cultural expectations, but there was a degree of optimism – things are changing for the better.

Research findings suggest that girls are far more likely to have an interest in STEM if the activities are relevant to their, or others, lives.

We used my charity Rubbish Science materials www.RubbishScience.com along with www.CollaboratEd.org.uk s TRIAL model to take people through a structured approach to scientific problem-solving.

A starting point could be: what do scientists look like?: It’s often a good idea to ask students to draw a scientist.

The chances are they will draw something like this:

Googling scientist gives quite a diverse selection of images, but googling cartoon scientist shows where this stereotype comes from. Few children can relate to this and often feel science is ;not for people like me.’

What do scientists do?

We could reduce it to: Claim – Evidence – Confidence

The claim is effectively the hypothesis: I claim I can run faster than you and then I can express a degree of confidence. I may have little evidence as I might never have seen you run, but I might make some assumptions. The aim of science is to test my claim and provide evidence that either supports or contradicts it. Scientists should not try to prove their claim is correct as this can lead to bias. Whenever a claim was made delegates were expected to shout “Where is the evidence?”

A lot of discussions ensued on what made good evidence and the difference between a belief system and evidence-based systems. This is hugely important to develop for a generation who will grow up bombarded with ‘FakeNews’

Take the Popes Tablecloth pull -Questions for your students – Is it real? What claim do you make? What is the evidence? How confident are you? How might we find more evidence?

Obviously, the way forward is to do some tablecloth pulls and see how it is done and armed with this knowledge watch it again!

Taking the tablecloth pull further, is the trick to remove a banknote from between two glass bottles. Many came and failed and were applauded for their failure. Gne succeeded with a way that ‘shouldn’t have worked’ Another learning experience

We used various Rubbish Science activities due to their authenticity and unknown best solutions. This also meant we had very cheap resources. Rubbish Science uses discarded materials such as plastic bags, bottles and cans in order to make useful things and learn scientific principles.

We started with the newspaper tower challenge. Making as tall a tower as possible using just two sheets of newspaper. It is really important to stipulate the winner is the person who has learned to most, not the one who builds the tallest one.

We worked through the trial model and considered what we needed to know. This involved considering stability and why things fall over

Some results are shown below. One of the things that stood out was the ability of these delegates. Their thinking and problem-solving abilities were superb. However, several groups failed to get an operational tower up in time. This failure should be seen as a learning experience. We kept promoting FAIL as First Attempt In Learning

Making fishing lines and nets from plastic bags was done very effectively with some groups systematically testing the three types of bags and finding the blue bags made the best lines. This activity often leads to students focussing on making very weak but long lines rather than really investigating how to make them strong.

One of the more interesting findings was from the insulate a house activity. The challenge was to build a house and insulate it in order to keep a beaker of water hot for as long as possible. A very large piece of cardboard was given to each group in order to not restrict their thinking. The results were put in order of effectiveness and the pattern is striking, if expected, that the smaller the house the better the heat retention. As the thicker the insulation would be – Insulating materials were restricted to an A4 sized are

On the ‘losing’ side on the right there are the results for people who focussed on the ‘house’ part of the build a house challenge. At the other end were people who were trying to make as efficient a Thermos flask as possible.  There is one anomalous result. The most effective house bucked the trend by being larger, however when looked at there was a chamber underneath that fitted directly over the beaker!

I have huge confidence that these incredibly talented young women will make very effective STEM ambassadors and pave the way for more girls choosing STEM careers in Vietnam.

Thanks to the sponsors