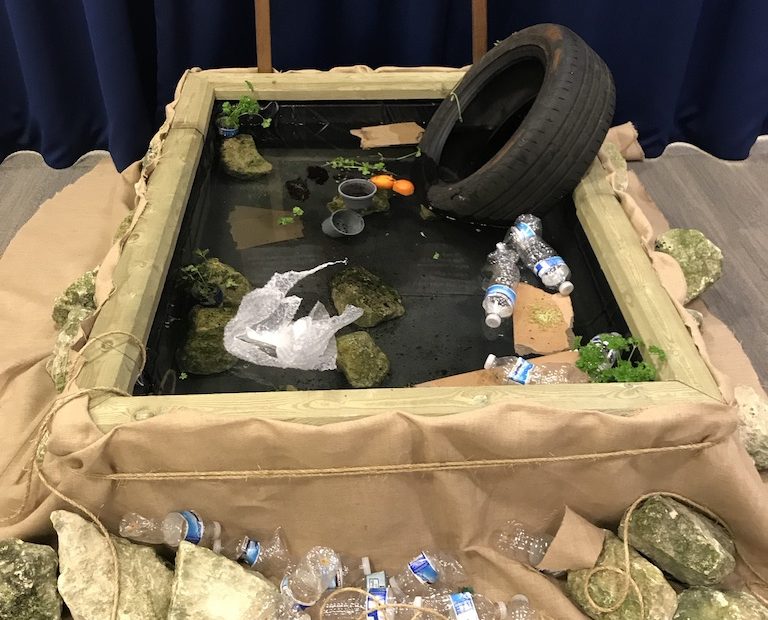 Rubbish Science was chosen by Google as a vehicle to showcase some of its products to large groups of Nordic Educators as part of its Anywhere Classroom Project.

One of the rooms at Google Offices in Victoria was converted into a makeshift Rubbish Dump complete with a pond and compost heap. Though I was disappointed they didn’t provide me with the pig I asked for! Workstations were made in order to provide a vertical surface that would replicate the wall of a shanty. The only space that many people who live in challenging conditions can claim as their own.

Delegates were welcomed into the room with a video of Sierra Leone: Beautiful beaches, wonderful people and great music. They then watched extracts of a Google Meet that I had recorded with one of my ex-students on the ground on a rubbish dump in Freetown. They were then given the scenario that they were stuck on the dump due to a virus outbreak and had a very limited time to create a degree of food security. They could only use the resources available to them. Plastic bottles, bags, compost and seeds, but could forage and find plants and other items in the room.

.Delegates had Chromebooks and were using Google Classroom that had some preloaded videos of me creating bottle gardens to give them some help if they needed it. One member of each group were shown how to use Google Jamboard to track their thoughts and learning journeys in a variety of multimedia ways.

What is important with Rubbish Science projects is to track and share the learning journeys, so we can all learn from each other. So Chromebooks and tablets were used to do this.

Delegates were encouraged to share their ideas as the competition is really won by those who learn the most. Rubbish Science projects run across from the richest to the poorest people in the World on a level playing field. We don’t care where you come from or how privileged you are, or not, we are only interested in your learning journey. What was fascinating was how different the Nordic nations, in general, were at tackling the problems. I’m too diplomatic to create stereotypes but what order would you put these nations in from the most rule orientated to the freest thinking? English, Danish, Finnish, Norwegian, Swedish and Dutch?